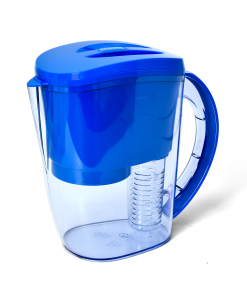 With recent revelations about the toxicity of Glyphosate it is extremely important to filter out this toxic chemical from our drinking water and the ProOne ProOne filter has been proven to effectively remove glyphosate from water!

The ProOne ProOne filter removes fluoride, glyphosate and scores of other toxins from your water making it a vital and important investment in your family’s health! Please click the link below to view the ProOne water filtration systems we carry and also please read the article below from Mercola.com that discusses the dangers of Glyphosate.

GE crops are typically far more contaminated with glyphosate than conventional crops, courtesy of the fact that they’re engineered to withstand extremely high levels of Roundup without perishing along with the weed.

A new peer-reviewed report authored by Anthony Samsel, a retired science consultant, and a long time contributor to the Mercola.com Vital Votes Forum, and Dr. Stephanie Seneff, a research scientist at the Massachusetts Institute of Technology (MIT), reveals how glyphosate wrecks human health.

In the interview above, Dr. Seneff summarizes the two key problems caused by glyphosate in the diet:

Nutritional deficiencies Systemic toxicity Their findings make the need for labelling all the more urgent, and the advice to buy certified organic all the more valid.

The Horrific Truth about Roundup

In 2009, a French court found Monsanto guilty of lying; falsely advertising its Roundup herbicide as “biodegradable,” “environmentally friendly” and claiming it “left the soil clean.”

Mounting evidence now tells us just how false such statements are. I don’t believe that Monsanto is one of the most evil companies on the planet for nothing. The company has done absolutely nothing to improve their worldwide influence on human and environmental health.

In the video above, Jeffrey Smith, author of the bestseller Seeds of Deception, says Monsanto, during some reflective moment, must have asked “What would Darth Vader do?” Because what they’ve come up with is a way of pretending that they’re beneficial and then insinuating themselves into the food and agriculture industry, and now it turns out that what they have is very, very dangerous.

Indeed, according to Dr. Seneff, glyphosate is possibly “the most important factor in the development of multiple chronic diseases and conditions that have become prevalent in Westernized societies,” including but not limited to:

While Monsanto insists that Roundup is as safe to humans as aspirin, Seneff and Samsel’s research tells a different story altogether. Their report, published in the journal Entropy1, argues that glyphosate residues, found in most commonly consumed foods in the Western diet courtesy of GE sugar, corn, soy and wheat, “enhance the damaging effects of other food-borne chemical residues and toxins in the environment to disrupt normal body functions and induce disease.”

Interestingly, your gut bacteria are a key component of glyphosate’s mechanism of harm.

Monsanto has steadfastly claimed that Roundup is harmless to animals and humans because the mechanism of action it uses (which allows it to kill weeds), called the shikimate pathway, is absent in all animals. However, the shikimate pathway IS present in bacteria, and that’s the key to understanding how it causes such widespread systemic harm in both humans and animals.

The bacteria in your body outnumber your cells by 10 to 1. For every cell in your body, you have 10 microbes of various kinds, and all of them have the shikimate pathway, so they will all respond to the presence of glyphosate!

Glyphosate causes extreme disruption of the microbe’s function and lifecycle. What’s worse, glyphosate preferentially affects beneficial bacteria, allowing pathogens to overgrow and take over. At that point, your body also has to contend with the toxins produced by the pathogens. Once the chronic inflammation sets in, you’re well on your way toward chronic and potentially debilitating disease. In the interview above, Dr. Seneff reviews a variety of chronic diseases, explaining how glyphosate contributes to each condition. So to learn more, I urge you to listen to it in its entirety. It’s quite eye-opening.

The Overlooked Component of Toxicity

The research reveals that glyphosate inhibits cytochrome P450 (CYP) enzymes, a large and diverse group of enzymes that catalyze the oxidation of organic substances. This, the authors state, is “an overlooked component of its toxicity to mammals.” One of the functions of CYP enzymes is to detoxify xenobiotics—chemical compounds found in a living organism that are not normally produced or consumed by the organism in question. By limiting the ability of these enzymes to detoxify foreign chemical compounds, glyphosate enhances the damaging effects of chemicals and environmental toxins you may be exposed to.

But that’s not all. Dr. Stephanie Seneff has been conducting research at MIT for over three decades. She also has an undergraduate degree in biology from MIT and a minor in food and nutrition, and I have previously interviewed her about her groundbreaking insights into the critical importance of sulfur in human health. Not surprisingly, this latest research also touches on sulfur, and how it is affected by glyphosate from food.

“[W]e show how interference with CYP enzymes acts synergistically with disruption of the biosynthesis of aromatic amino acids by gut bacteria, as well as impairment in serum sulfate transport,” the authors write.

“Consequences are most of the diseases and conditions associated with a Western diet, which include gastrointestinal disorders, obesity, diabetes, heart disease, depression, autism, infertility, cancer and Alzheimer’s disease. … [T]he recent alarming increase in all of these health issues can be traced back to a combination of gut dysbiosis, impaired sulfate transport, and suppression of the activity of the various members of the cytochrome P450 (CYP) family of enzymes.”

For the past 30 years, Dr. Seneff has been passionate about teasing out potential causes of autism, after seeing what it was like for a close friend whose son was diagnosed. She points out the clear correlations between increased glyphosate use over recent years (the result of genetically engineered crops causing weed resistance, necessitating ever-larger amounts to be used) and skyrocketing autism rates.

The rate of autism has risen so quickly, there can be no doubt that it has an environmental cause. Our genes simply cannot mutate fast enough to account for the rapid rise we’re now seeing. The latest statistics released by the CDC on March 20 show that 1 in 50 children in the US now fall within the autism spectrum2,3, with a 5:1 boy to girl ratio. Just last year the CDC reported a rate of 1 in 88, which represented a 23 percent increase since 2010, and 78 percent since 2007. Meanwhile, I remember when the incidence of autism in the US was only 1 in 10,000—just short of 30 years ago!

Dr. Seneff identified two key problems in autism that are unrelated to the brain yet clearly associated with the condition—both of which are linked with glyphosate exposure (starting at 10 minutes into the interview, she gives an in-depth explanation of how glyphosate causes the many symptoms associated with autism):

Gut dysbiosis (imbalances in gut bacteria, inflammation, leaky gut, food allergies such as gluten intolerance) Disrupted sulfur metabolism / sulfur and sulfate deficiency Interestingly, certain microbes in your body actually break down glyphosate, which is a good thing. However, a byproduct of this action is ammonia, and children with autism tend to have significantly higher levels of ammonia in their blood than the general population. Ditto for those with Alzheimer’s disease. In your brain, ammonia causes encephalitis, i.e. brain inflammation.

Another devastating agent you really do not want in your body is formaldehyde, which a recent nutritional analysis discovered is present in genetically engineered corn at a level that is 200 times the amount that animal studies have determined to be toxic to animals. Formaldehyde destroys DNA and can cause cancer.

Other research backing up the Roundup-autism link is that from former US Navy staff scientist Dr. Nancy Swanson. She has a Ph.D. in physics, holds five US patents and has authored more than 30 scientific papers and two books on women in science. Ten years ago, she became seriously ill, and in her journey to regain her health she turned to organic foods. Not surprisingly (for those in the know) her symptoms dramatically improved. This prompted her to start investigating genetically engineered foods.

She has meticulously collected statistics on glyphosate usage and various diseases and conditions, including autism. A more perfect match-up between the rise in glyphosate usage and incidence of autism is hard to imagine… To access her published articles and reports, please visit Sustainable Pulse4, a European website dedicated to exposing the hazards of genetically engineered foods.

When Food Is Poison…

What the biotech industry, spearheaded by Monsanto, has managed to do is turn food into poison… quite literally, and in more ways than one. Here, we’re just talking about the effects of Roundup. There are plenty of indications that the genetic alteration of a crop itself can pose significant health concerns. So with the vast majority of GE crops, you have no less than two potentially hazardous factors to contend with, glyphosate toxicity being just one part of the equation.

As discussed above, glyphosate has a number of devastating biological effects. So much so that it may very well be one of the most important factors in the development of a wide variety of modern diseases and conditions, including autism. In summary, these detrimental effects include:

Nutritional deficiencies, as glyphosate immobilizes certain nutrients and alters the nutritional composition of the treated crop Disruption of the biosynthesis of aromatic amino acids (these are essential amino acids not produced in your body that must be supplied via your diet) Increased toxin exposure (this includes high levels of glyphosate and formaldehyde in the food itself) Impairment of sulfate transport and sulfur metabolism; sulfate deficiency Systemic toxicity—a side effect of extreme disruption of microbial function throughout your body; beneficial microbes in particular, allowing for overgrowth of pathogens Gut dysbiosis (imbalances in gut bacteria, inflammation, leaky gut, food allergies such as gluten intolerance) Enhancement of damaging effects of other food-borne chemical residues and environmental toxins as a result of glyphosate shutting down the function of detoxifying enzymes Creation of ammonia (a byproduct created when certain microbes break down glyphosate), which can lead to brain inflammation associated with autism and Alzheimer’s disease How to Protect Yourself and Your Family from This Systemic Poison

It’s important to understand that the glyphosate sprayed on conventional and genetically engineered crops actually becomes systemic throughout the plant, so it cannot be washed off. It’s inside the plant. For example, genetically engineered corn has been found to contain 13 ppm of glyphosate, compared to zero in non-GMO corn. At 13 ppm, GMO corn contains more than 18 times the “safe” level of glyphosate set by the EPA. Organ damage in animals has occurred at levels as low as 0.1 ppm. If that’s not reason enough to become a label reader to avoid anything with corn in it, such as corn oil or high fructose corn syrup, I don’t know what is.

You’d also be wise to stop using Roundup around your home, where children and pets can come into contact with it simply by walking across the area.

Until the US requires genetically engineered (GE) foods to be labeled, the only way you can avoid GE ingredients is to make whole, fresh organic foods the bulk of your diet, and to only buy 100% USDA certified organic processed foods. Meats need to be grass-fed or pastured to make sure the animals were not fed GE corn or soy feed.

This article was written by Dr. Mercola and you can read the full article at Mercola.com